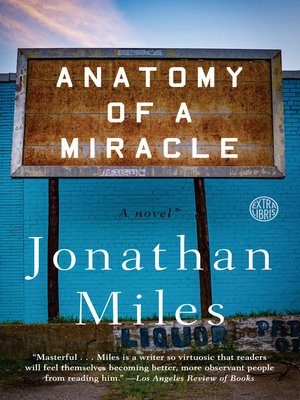 Anatomy of a Miracle

FictionHumor (Fiction)
"Funny, bighearted...Miles specializes in giving fully rounded humanity to characters who might elsewhere be treated as stock figures...pitch-perfect."
— New York Times Book Review
"Miles is a writer so virtuosic that readers will feel themselves becoming better, more observant people from reading him."
— Los Angeles Review of Books
A profound new novel about a paralyzed young man's unexplainable recovery—a stunning exploration of faith, science, mystery, and the meaning of life

Rendered paraplegic after a traumatic event four years ago, Cameron Harris has been living his new existence alongside his sister, Tanya, in their battered Biloxi, Mississippi neighborhood where only half the houses made it through Katrina. One stiflingly hot August afternoon, as Cameron sits waiting for Tanya during their daily run to the Biz-E-Bee convenience store, he suddenly and inexplicably rises up and out of his wheelchair.

In the aftermath of this "miracle," Cameron finds himself a celebrity at the center of a contentious debate about what's taken place. And when scientists, journalists, and a Vatican investigator start digging, Cameron's deepest secrets—the key to his injury, to his identity, and, in some eyes, to the nature of his recovery—become increasingly endangered. Was Cameron's recovery a genuine miracle, or a medical breakthrough? And, finding himself transformed into a symbol, how can he hope to retain his humanity?

Brilliantly written as closely observed journalistic reportage and filtered through a wide lens that encompasses the vibrant characters affected by Cameron's story, Anatomy of a Miracle will be read, championed, and celebrated as a powerful story of our time, and the work of a true literary master.
FictionHumor (Fiction)

JONATHAN MILES is the author of the novels Dear American Airlines and Want Not, both New York Times Notable Books. He is a former columnist for the New York Times, has served as a Contributing Editor to magazines ranging from Details to Field & St...

More about Jonathan Miles
Anatomy of a Miracle
Copy and paste the code into your website.
New here? Learn how to read digital books for free