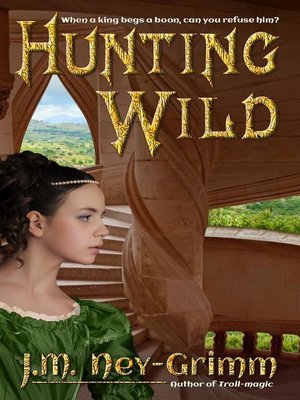 Young Remeya - fosterling and maid-in-waiting to King Xavo's sister - worships the old and forbidden horned god alongside the princess.
A worship made taboo half a millennium ago. Performed still in secret by a few. Quietly tolerated by the king.
Until madness took him, there beside the stone well on the grassy hillside of the castle's outer bailey.
As the king's mind unravels into violence, no one near him remains safe, not even his best beloved. Especially not his best beloved.
Worse, Remeya believes King Xavo's insanity arose from her own mistake. Because she said yes, instead of no.
When life itself hangs in the balance, putting wrong to right is surely past praying for. Or is it?
Epic fantasy in which old beliefs and old loyalties clash with hidden magic in the Middle Ages of J.M. Ney-Grimm's god-touched North-lands.
EXCERPT FROM HUNTING WILD
The pebbles of the underground stream bed dug into the soles of her feet, and the chill of the shallow water numbed her toes.
The rough surface of the ceiling sloped down, scraping her back, forcing her to bend, to crouch, to curl enough that she caught her balance with her hands in the wet.
The light faded swiftly. Had she gone far enough?
She paused, eyes adjusting.
The glimmering ripples of the spring's source cast dim flickers against the rocks pressing her down.
ABOUT THE AUTHOR
J.M. Ney-Grimm lives with her husband and children in Virginia, just east of the Blue Ridge Mountains. She's learning about permaculture gardening and debunking popular myths about food. The rest of the time she reads Robin McKinley, Diana Wynne Jones, and Lois McMaster Bujold, plays boardgames like Settlers of Catan, rears her twins, and writes stories set in her troll-infested North-lands. Look for her novels and novellas at your favorite bookstore - online or on Main Street.