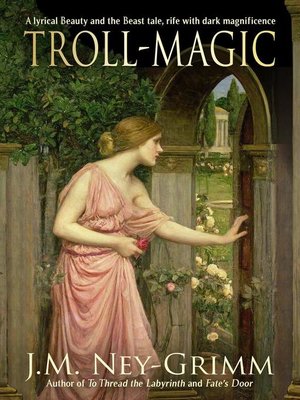 Prince Kellor, cursed by the troll-witch Mandine to live as a north-bear, wrestles with the challenges of his beast form. Pain wracks his body. Unpredictable rages blur his mind. And straight thinking proves elusive, confusing his search for the loopholes that every curse possesses.
His curse turns on the choices of his childhood friend Elle. She once shared Kellor's idyllic rambles through the wilderlands. She now loves all things musical. Might Kellor persuade her to neglect her own dreams to confront his lethal nightmare? Should he?
But no troll-witch permits her prey to escape with ease. The illusory loopholes in Mandine's curse all twist back to its entombing heart.
J.M. Ney Grimm tells a lyrical Beauty and the Beast tale, rife with moments of shining glory, dark magnificence, and unexpected significance. The fate of an empire, a people, and a world unfurls from Kellor's deeds and Elle's choices.
PRAISE FOR TROLL-MAGIC
"...Troll-magic has a certain poetic style I've yet to come across elsewhere. Descriptions are...evocative, characters are natural and complex..." — James J. Parsons
"This is the kind of book that you keep thinking about... All through the day you will find yourself hoping for just a few minutes to pick it up again. Loosely based on a familiar folk tale, the world depicted is magical, but the people are very real." — M.A. Dunn
"Troll-magic was a fun read... This story mixes adventure, romance, life lessons and, of course, magic. J.M. Ney-Grimm has created a fascinating new world. Her detailed descriptions and colourful writing style bring the world of Silmaren and the Norse-lands right off the page and into life." — W. Walsh
"Her work compares favorably with Robin McKinley and Patricia McKillip... if you're looking for an intelligent, fun and interesting read, I highly recommend this book." — Mira
EXCERPT FROM TROLL-MAGIC
In darkness he touched his nose, felt his ears. Oh Sias! They were larger. More deformed. Horror shook his fingertips. What should he do? What could he do?
Chaotic memory gripped him. Stabbing tangerine light and agonizing pain. His body taken by unfathomable force and twisted, reshaped.
What was this? Where was this? None of it made sense. And the absolute blackness didn't help. He took a deep breath. And another. There. He was steadier now. Some sort of solution existed. He could sense it, just out of reach. Closing his eyes against the dark, he stretched his mind. He'd done . . . something . . . last . . . night? It didn't matter when. What was it he'd done? He tried again to call it to mind, pressing against the blankness in his thoughts. Breathing was part of it; patterned breathing. Which reminded him that holding his breath wouldn't help. Someone . . . a teacher, had told him that tension inhibited . . . something. He sighed. Patterned breathing. Fine, he would do some. He breathed out to a slow count of three, then in for the same.
And then he had it. Patterned breathing and patterning. He was a pattern-master. Or, at least, an apprentice one. And he'd done . . . not patterning, last night, but a forbidden version of it. Something other.