The Kidnapping of Edgardo Mortara 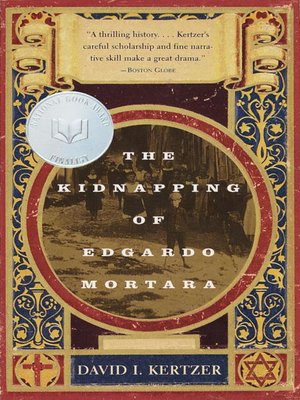 View more libraries...
Soon to be a major motion picture from Steven Spielberg.
A National Book Award Finalist
The extraordinary story of how the vatican's imprisonment of a six-year-old Jewish boy in 1858 helped to bring about the collapse of the popes' worldly power in Italy.
Bologna: nightfall, June 1858. A knock sounds at the door of the Jewish merchant Momolo Mortara. Two officers of the Inquisition bust inside and seize Mortara's six-year-old son, Edgardo. As the boy is wrenched from his father's arms, his mother collapses. The reason for his abduction: the boy had been secretly "baptized" by a family servant. According to papal law, the child is therefore a Catholic who can be taken from his family and delivered to a special monastery where his conversion will be completed.
With this terrifying scene, prize-winning historian David I. Kertzer begins the true story of how one boy's kidnapping became a pivotal event in the collapse of the Vatican as a secular power. The book evokes the anguish of a modest merchant's family, the rhythms of daily life in a Jewish ghetto, and also explores, through the revolutionary campaigns of Mazzini and Garibaldi and such personages as Napoleon III, the emergence of Italy as a modern national state. Moving and informative, the Kidnapping of Edgardo Mortara reads as both a historical thriller and an authoritative analysis of how a single human tragedy changed the course of history.
From the Trade Paperback edition.