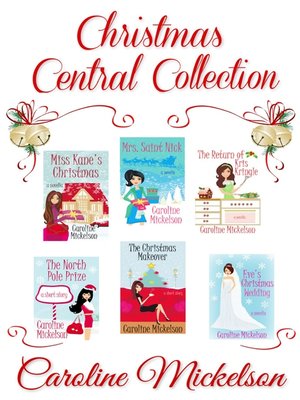 Join Santa Claus, his extended family, and the merriest of elves at the North Pole in a series of six fun-filled holiday romantic comedies guaranteed to get you in the holiday spirit. The complete Christmas Central Collection offers readers four novellas, two short stories, and too many laugh-out-loud moments to count.

Miss Kane's Christmas – As a favor to her father, Santa's daughter Carol leaves the North Pole to pose as a nanny for single father Ben Hanson's two young children. Ben despises everything holiday related. How can Carol fall for a man who's writing a book entitled 'Beyond Bah Humbug: Why lying to your kids about Santa is a Bad Idea'?

Mrs. Saint Nick – Sparks fly when efficiency expert Holly Jamison starts her new job at the North Pole and is assigned to work with St. Nick, Santa's son. Holly's convinced that Nick is a spoiled playboy who doesn't pull his weight, while Nick is convinced that Holly's the woman of his dreams.

The Return of Kris Kringle – After years away home, Kris Kringle returns to share her love of healthy cuisine as the North Pole's new head chef. Unbeknownst to Kris, her Uncle Santa decides to cook up a little trouble when he hires her ex-fiancé, Kyle Masterson, as her co-chef.

The North Pole Prize -  Christmas Central engineer Garrett McCree is Scottish by birth and reclusive by nature. He's less than thrilled when Santa asks him to act as a guide to the effervescent Angelique Devereaux who's spending a week at the North Pole as an honored guest. Not only is Garrett's solitude disturbed, he fears the walls he's carefully constructed around his heart are in danger of being dismantled by the Claus' holiday-loving guest.

The Christmas Makeover – Interior designer Jackie Frost is happy to oblige when Santa Claus, her late father's oldest friend, asks her for a favor. Jackie agrees to take on the herculean task of redecorating Christmas Central as a surprise for Mrs. Claus even though December 25th is right around the corner. The true challenge, though, turns out to be working alongside the talented and incredibly attractive craftsman Dean Bradshaw, a man who melts the frozen protective layer around Jackie's heart.

Eve's Christmas Wedding – Renowned wedding planner Eve Bennington loves everything about her job. Unless, that is, she's asked to arrange a December ceremony because it reminds Eve of the time she was jilted at her own Christmas eve wedding. Eve doesn't believe in Santa Claus' existence any more than she believes she and her ex-boyfriend Hunter will ever end up together again. So, when she ends up meeting the real Santa, what does that mean for her future with Hunter?