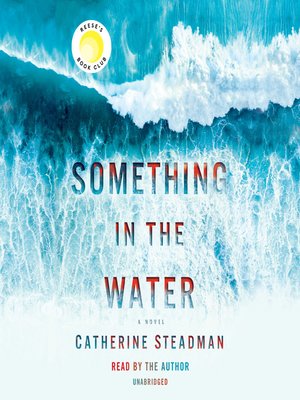 Something in the Water

FictionLiteratureSuspenseThriller
A shocking discovery on a honeymoon in paradise changes the lives of a picture-perfect couple in this taut psychological thriller debut—for readers of Ruth Ware, Paula Hawkins, and Shari Lapena.
"A psychological thriller that captivated me from page one. What unfolds makes for a wild, page-turning ride! It's the perfect beach read!"—Reese Witherspoon (Reese's Book Club x Hello Sunshine book pick)
A REESE WITHERSPOON BOOK CLUB PICK
If you could make one simple choice that would change your life forever, would you?

Erin is a documentary filmmaker on the brink of a professional breakthrough, Mark a handsome investment banker with big plans. Passionately in love, they embark on a dream honeymoon to the tropical island of Bora Bora, where they enjoy the sun, the sand, and each other. Then, while scuba diving in the crystal blue sea, they find something in the water. . . .

Could the life of your dreams be the stuff of nightmares?

Suddenly the newlyweds must make a dangerous choice: to speak out or to protect their secret. After all, if no one else knows, who would be hurt? Their decision will trigger a devastating chain of events. . . .

Have you ever wondered how long it takes to dig a grave?

Wonder no longer. Catherine Steadman's enthralling voice shines throughout this spellbinding debut novel. With piercing insight and fascinating twists, Something in the Water challenges the reader to confront the hopes we desperately cling to, the ideals we're tempted to abandon, and the perfect lies we tell ourselves.
Advance praise for Something in the Water
"With unreliable characters, wry voices, exquisite pacing, and a twisting plot, [Catherine] Steadman potently draws upon her acting chops. . . . A darkly glittering gem of a thriller from a new writer to watch."—Kirkus Reviews (starred review)
"Captivating . . . daring . . . The threats and increasingly bad decisions accelerate with Bourne-like velocity. . . . Steadman [is] a newcomer worth watching."—Publishers Weekly
"An unbearably tense debut with a knockout premise, Something in the Water had me hooked from the very first sentence. Thrilling and thought-provoking, it's the perfect beach read. I devoured it!"—Riley Sager, bestselling author of Final Girls
FictionLiteratureSuspenseThriller

More about Catherine Steadman
Something in the Water
Copy and paste the code into your website.
New here? Learn how to read digital books for free