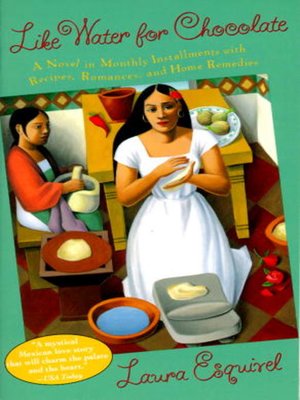 A Novel in Monthly Installments with Recipes, Romances, and Home Remedies

FantasyFictionLiterature
The bestselling phenomenon and inspiration for an award-winning film.
Earthy, magical, and utterly charming, this tale of family life in turn-of-the-century Mexico blends poignant romance and bittersweet wit.
The classic love story takes place on the De la Garza ranch, as the tyrannical owner, Mama Elena, chops onions at the kitchen table in her final days of pregnancy. While still in her mother's womb, her daughter to be weeps so violently she causes an early labor, and little Tita slips out amid the spices and fixings for noodle soup. This early encounter with food soon becomes a way of life, and Tita grows up to be a master chef, using cooking to express herself and sharing recipes with readers along the way.
FantasyFictionLiterature

Originally published in 1990, Like Water for Chocolate (Como agua para chocolate) won Laura Esquivel international acclaim. The film based on the book, with a screenplay by Laura Esquivel, swept the Ariel awards of the Mexican Academy of Motion Pi...

More about Laura Esquivel
Like Water for Chocolate
Copy and paste the code into your website.
New here? Learn how to read digital books for free