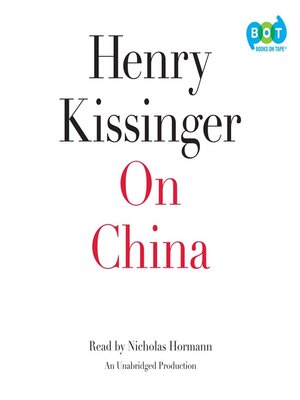 View more libraries...
Henry Kissinger examines how China has approached diplomacy, strategy, and negotiation throughout its history and reflects on the consequences for the global balance of power in the twenty-first century.

Since no other country can claim a more powerful link to its ancient past and classical principles, any attempt to understand China’s future world role must begin with an appreciation of its long history. For centuries, China rarely encountered other societies of comparable size and sophistication; it was the “Middle Kingdom,” treating the peoples on its periphery as vassal states. At the same time, Chinese statesmen developed a canon of strategic thought that prized the virtues of subtlety, patience, and indirection over feats of martial prowess.

In On China, Kissinger examines key episodes in Chinese foreign policy, from the classical era to the present day. With his singular vantage point on U.S.-China relations, Kissinger traces the evolution of this fraught but crucial relationship over the past sixty years, following its dramatic course from estrangement to strategic partnership to economic interdependence and toward an uncertain future.