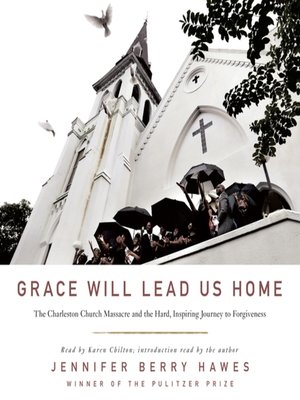 Grace Will Lead Us Home

The Charleston Church Massacre and the Hard, Inspiring Journey to Forgiveness

"This audiobook achieves an exceptional performance of an important work on a difficult subject—mass murder and its aftermath." - AudioFile Magazine, Earphones Award winner

This program includes an introduction read by the author.

A deeply moving work of narrative nonfiction on the tragic shootings at the Mother Emanuel AME church in Charleston, South Carolina.

On June 17, 2015, twelve members of the historically black Emanuel AME Church in Charleston, South Carolina welcomed a young white man to their evening Bible study. He arrived with a pistol, 88 bullets, and hopes of starting a race war. Dylann Roof's massacre of nine innocents during their closing prayer horrified the nation. Two days later, some relatives of the dead stood at Roof's hearing and said, "I forgive you." That grace offered the country a hopeful ending to an awful story. But for the survivors and victims' families, the journey had just begun.

In Grace Will Lead Us Home, Pulitzer Prize-winning journalist Jennifer Berry Hawes provides a definitive account of the tragedy's aftermath. With unprecedented access to the grieving families and other key figures, Hawes offers a nuanced and moving portrait of the events and emotions that emerged in the massacre's wake.

The two adult survivors of the shooting begin to make sense of their lives again. Rifts form between some of the victims' families and the church. A group of relatives fights to end gun violence, capturing the attention of President Obama. And a city in the Deep South must confront its racist past. This is the story of how, beyond the headlines, a community of people begins to heal.

An unforgettable and deeply human portrait of grief, faith, and forgiveness, Grace Will Lead Us Home is destined to be a classic in the finest tradition of journalism.

More praise for Grace Will Lead Us Home:

"Vividly rendered ... [Hawes is] a writer with the exceedingly rare ability to observe sympathetically both particular events and the horizon against which they take place without sentimentalizing her subjects. Hawes is so admirably steadfast in her commitment to bearing witness that one is compelled to consider the story she tells from every possible angle." — New York Times Book Review

"The great value of this book is that it tells the stories of the survivors and victims' families on their own terms, in all of their humanity, while also showing us how Charleston's tortured history of racism and gun violence came together on that night in June." — Gabrielle Union

"In Grace Will Lead Us Home, Jennifer Berry Hawes breathes poetry into tragedy to bring to life the epic grief that haunted a nation's moral imagination...If white supremacy is ever to meet a death knell, this ringing endorsement of fallen yet redeemable humanity will echo loudly in our hearts." — Michael Eric Dyson

Jennifer Berry Hawes writes for the Charleston-based Post and Courier, where she spent a decade covering religion and now works on a team that handles in-depth investigative reporting projects for the paper. Her work has won many honors including ...

Jennifer Berry Hawes writes for the Charleston-based Post and Courier, where she spent a decade covering religion and now works on a team that handles in-depth investigative reporting projects for the paper. Her work has won many honors including ...

More about Jennifer Berry Hawes
Grace Will Lead Us Home
Copy and paste the code into your website.
New here? Learn how to read digital books for free