Say to These Mountains

ebook ∣ A Biography of Faith and Ministry in Rural Haiti 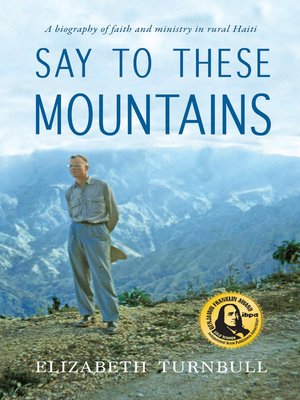 View more libraries...
Through the true story of Wallace Turnbull, one of Haiti's pioneers in development and missions, Say To These Mountains takes readers on a journey where grace and beauty shine into even the tightest crevices of brokenness, poverty, and loss.

Over the course of 70 years, Wallace's work changed countless lives and influenced national policy in both Haiti and the United States. For his contributions, he was decorated with the National Order of Honor and Merit, Haiti's highest honor.

As told by Wallace's granddaughter, this eloquent biography reveals the life of a complex man and his adopted country, painting a picture of hope and mercy vastly different from the often-grim stories shared about the island nation and her people.

"How many children, how many elderly, how many generations were touched—how many survived—because of the work the Pastor has done?" –President Michel Martelly of Haiti during the bestowing of the Order of Honor and Merit to Wallace Turnbull