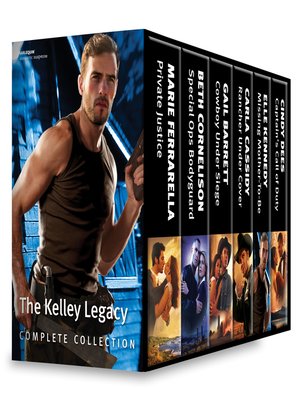 FictionRomanceSuspenseThriller
Senator Joe Kelley's secrets have finally come to light and his family is rallying around him to help. But they're about to find much more than sordid family skeletons: danger—and love—are on the horizon!
Private Justice by Marie Ferrarella
When a senator is disgraced by scandal, his hotshot attorney son, Dylan, rushes to pick up the pieces. His only ally is the feisty Cindy Jensen, whose loyalty to her boss is as compelling as her drop-dead-gorgeous looks. But Cindy's grappling with an unexpected pregnancy and scars from the past. Little do she and Dylan know, Senator Kelley has even more secrets...secrets that might cost the newfound lovers their lives.
Special Ops Bodyguard by Beth Cornelison
Gage Prescott can't put his finger on it, but something about waitress Kate Rogers. Not that it matters. The battle-scarred ex-Army Ranger has come to this Montana town as bodyguard to Senator Kelley, not to let a pretty face distract him. But Kate has her own mission. If Gage can assist with her sister's abusive husband, she'll accept that gratefully. But will their growing passion interfere when their duties involve life and death?
Cowboy Under Siege by Gail Barrett
An enemy of the Kelley family is seeking vengeance on Cole Kelley—and the Montana ranch he'll fight fiercely to protect. His land is the only thing Cole can depend on. Not his powerful, scandal-ridden father. And especially not Bethany Moore—the beautiful nurse who left him years ago...and is now back with secrets. Their flame burned brightly once before, but will they have a chance to rekindle it before all is lost?
Rancher Under Cover by Carla Cassidy
Surgeon Caitlin O'Donahue nearly lost her life doing volunteer work in the jungles of El Salvador. She escapes to her childhood ranch to discover her father is in hiding. The only man she can trust is a stranger—undercover agent Rhett Kane, who is hell-bent on busting Caitlin's father. When his dual lives collide, he's left with the ultimate choice. Will he choose love over duty—and will it cost him his life's mission?
Missing Mother-To-Be by Elle Kennedy
Lana Kelley never imagined the magical night she shared with a stranger would result in pregnancy. But when she's kidnapped, Lana is shocked to discover one of her captors is none other than the father of her unborn child. Though mercenary Deacon Holt tries to remain detached, he can't deny he still wants Lana. And when her life is threatened, Deacon will risk all to help her escape...
Captain's Call of Duty by Cindy Dees
Captain Jim Kelley is thunderstruck. Suddenly Alexandra Mendez has gone from tomboy to all woman. Alex is under his command on a dangerous undercover mission, but Jim has to keep reminding himself they were only pretending to be lovers. Alex has loved Jim all her life, but they'd always been just friends. Jim's sudden attention is unexpected...and thrilling. But is Jim just infatuated by her looks, or is it her he wanted?
FictionRomanceSuspenseThriller

Carla Cassidy is a New York Times bestselling author who has written more than 125 novels for Harlequin Books. She is listed on the Romance Writer's of America Honor Roll and has won numerous awards. Carla believes the only thing better than curl...

Award-winning author Beth Cornelison has been writing stories since she was a child. A University of Georgia graduate, Cornelison worked in Public Relations before becoming a full-time writer. She has won many honors for her writing, including th...

A RITA-award nominated author, Elle Kennedy grew up in the suburbs of Toronto, Ontario, and holds a B.A. in English from York University. From an early age, she knew she wanted to be a writer, and actively began pursuing that dream when she was a...

Raised on a horse farm in Michigan, Cindy Dees dropped out of high school at 15 to attend the University of Michigan where she earned a B.A. in Russian and East European Studies. She became a U.S. Air Force Pilot, worked at the White House, and w...

Former Rita finalist Gail Barrett always knew she wanted to be a writer. After living everywhere from Spain to the Bahamas, earning a graduate degree in Linguistics, and teaching high school Spanish for years, she finally fulfilled that goal. Her...

This USA TODAY bestselling and RITA ® Award-winning author has written more than two hundred books for Harlequin Books and Silhouette Books, some under the name Marie Nicole. Her romances are beloved by fans worldwide. Visit her website at www.mar...

The Kelley Legacy Complete Collection
Copy and paste the code into your website.
New here? Learn how to read digital books for free