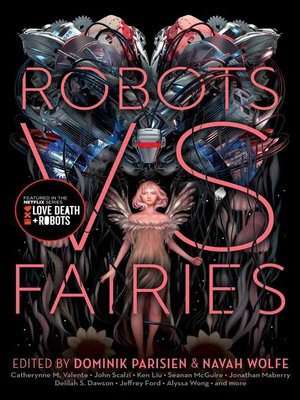 A unique anthology of all-new stories that challenges authors to throw down the gauntlet in an epic genre battle and demands an answer to the age-old question: Who is more awesome—robots or fairies?
Rampaging robots! Tricksy fairies! Facing off for the first time in an epic genre death match!

People love pitting two awesome things against each other. Robots vs. Fairies is an anthology that pitches genre against genre, science fiction against fantasy, through an epic battle of two icons.

On one side, robots continue to be the classic sci-fi phenomenon in literature and media, from Asimov to WALL-E, from Philip K. Dick to Terminator. On the other, fairies are the beloved icons and unquestionable rulers of fantastic fiction, from Tinkerbell to Tam Lin, from True Blood to Once Upon a Time. Both have proven to be infinitely fun, flexible, and challenging. But when you pit them against each other, which side will triumph as the greatest genre symbol of all time?

There can only be one...or can there?

Featuring an incredible line-up of authors including John Scalzi, Catherynne M. Valente, Ken Liu, Max Gladstone, Alyssa Wong, Jonathan Maberry, and many more, Robots vs. Fairies will take you on a glitterbombed journey of a techno-fantasy mash-up across genres.
FantasyFictionScience FictionShort Stories

Dominik Parisien is an editor, poet, and writer. He has worked on several anthologies with Ann and Jeff VanderMeer, including The Time Traveler's Almanac, Sisters of the Revolution, and The Bestiary. He is the editor for Clockwork Canada, an antho...

Navah Wolfe is a Hugo Award–nominated editor at Saga Press and the coeditor of The Starlit Wood: New Fairy Tales and Mythic Dream, along with Dominik Parisien. She was previously an editor at Simon & Schuster Books for Young Readers, where she wor...

More about Navah Wolfe
Robots vs. Fairies
Copy and paste the code into your website.
New here? Learn how to read digital books for free