The Sense of Death 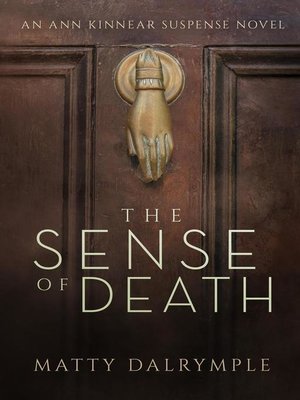 "A frighteningly meticulous villain and a formidable protagonist will have readers breezing through the pages." —Kirkus Reviews

"Airtight. Crucial plot details lock into place in the denouement like the tumblers of a Diebold safe. The characters are clever, real, and enjoyable, but also organic, their emotions genuinely wrought; there is no formula for brilliant writing like this." —Robert Blake Whitehill, Bestselling Author of The Ben Blackshaw Series

When a real estate mogul's daughter-in-law dies, Philadelphia Detective Joe Booth suspects the woman's husband. But accusing a powerful man's son of murder is a risky business, and Booth knows he needs more to convict than the scant evidence he has.

Then he finds the one person who might be able to uncover the truth: psychic-for-hire Ann Kinnear.

It's a last-ditch effort to find something – anything – to nail down who did it. But soon, drawn ever deeper into the vision of a dead woman whose ghost cries out for justice, Ann finds herself – and her powers – ensnared in a web of deceit, betrayal, and death among society's elite.

Official interest is waning. The murderer's tracks are growing cold. But the dead will not be silenced, and Ann will do whatever it takes to solve the case of one woman's lost life ... even if it means endangering her own.

A mix of supernatural thriller and psychic suspense culminating in a deadly showdown in a remote Adirondack cabin, THE SENSE OF DEATH is the first book in the popular Ann Kinnear Suspense Novels series. Click "Buy Now" to follow Ann as she pursues the truth that's wrapped in the sense of death!