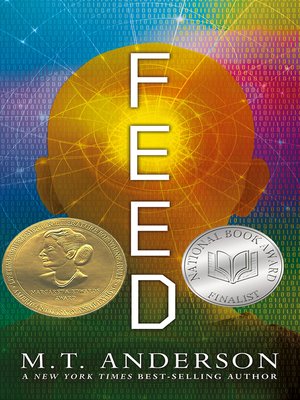 Identity crises, consumerism, and star-crossed teenage love in a futuristic society where people connect to the Internet via feeds implanted in their brains. Winner of the LA Times Book Prize.

For Titus and his friends, it started out like any ordinary trip to the moon - a chance to party during spring break and play around with some stupid low-grav at the Ricochet Lounge. But that was before the crazy hacker caused all their feeds to malfunction, sending them to the hospital to lie around with nothing inside their heads for days. And it was before Titus met Violet, a beautiful, brainy teenage girl who knows something about what it's like to live without the feed-and about resisting its omnipresent ability to categorize human thoughts and desires.

Following in the footsteps of George Orwell, Anthony Burgess, and Kurt Vonnegut, Jr., M. T. Anderson has created a brave new world - and a hilarious new lingo - sure to appeal to anyone who appreciates smart satire, futuristic fiction laced with humor, or any story featuring skin lesions as a fashion statement.

M. T. Anderson is an accomplished author of a wide range of titles, including works of fantasy and satire, for readers of various ages. He studied English literature at Harvard University and Cambridge University and went on to receive his MFA in ...

More about M. T. Anderson
Feed
Copy and paste the code into your website.
New here? Learn how to read digital books for free