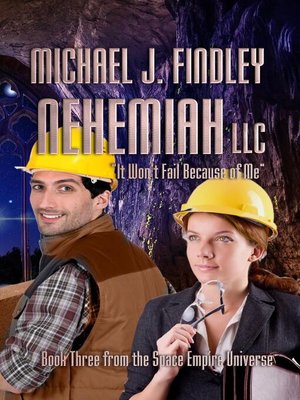 Joan Cohen's people have thrived beneath Mars' turbulent surface by turning sandblasted caverns into cozy living areas, parkways and farms. The Nehemiah LLC group is both a strongly-knit, deeply faith-driven community and a team of life support experts.
Anthony Lewis is a quirky engineer, an outsider with a million questions about schedules, deadlines, and why Joan does what she does. Can they overcome their differences long enough to save their Space Empire from a crippling shortage of resources?
The gas-collecting balloon ship Sojourner lies dead in space, its life support inexplicably frozen. One lost repair ship means searching a vast maze of tubing. A single failed component planetside can halt dozens of projects and jeopardize the countdown to a critical launch window.
No light sabres. No warp drive. It's more like the real thing — an Apollo mission plus floating farms plus Martian underground parks. "It won't fail because of me" takes on a whole new meaning.
"So we can move people in in three or four days?" asked Anthony.
"Well, after we finish sandblasting..." said Joan.
"So this is sandblasting?" asked Anthony.
"Well, he can say something besides 'How long will this take?'" said Joan. "After the sandblasting is finished, however long that takes, then the room is sprayed with foam insulation. The foam stabilizes the temperature and seals the room from air leaks. It also protects the room from minor vibration. At that point the people who build the room come in with plumbing, electrical, temperature control, walls, air quality and pressure. The next day after they are finished the furniture moves in, and then the people. So, it's a minimum of a week. It's more if you leave because there is no one else to operate your sandblaster. Then we train them how to build more rooms and we go on to something else."
"Like what?" asked Anthony.
"You spend your entire life dreaming up ways to give other people work," said Joan. "Stick around and do some of the work yourself. Let me give you a list. We could do more sandblasting. There are at least a hundred projects that need enlargement. If that's not to your taste, we could fill with foam insulation, finish rooms, weld, install furniture, work on making the roof of the production area open to the surface, enlarge the life support systems to cover the new area, synthesize more air and water, transport materials ... "
"I really like one thing you said," interrupted Anthony. "That's the 'we could' part."