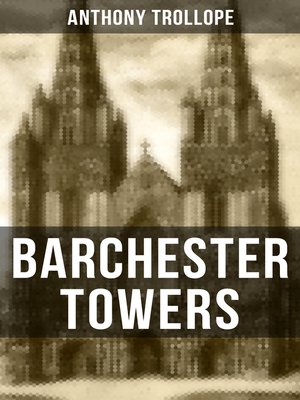 Victorian Classic from the prolific English novelist, known for The Palliser Novels, The Prime Minister, The Warden, Doctor Thorne, Can You Forgive Her? and Phineas Finn

FictionLiteratureHistorical Fiction
"Barchester Towers" is the second novel in Anthony Trollope's series known as the "Chronicles of Barsetshire". Among other things it satirises the then raging antipathy in the Church of England between High Church and Evangelical adherents. Barchester Towers concerns the leading clergy of the cathedral city of Barchester. The much loved bishop having died, all expectations are that his son, Archdeacon Grantly, will succeed him. Instead, owing to the passage of the power of patronage to a new Prime Minister, a newcomer, the far more Evangelical Bishop Proudie, gains the see. His wife, Mrs Proudie, exercises an undue influence over the new bishop, making herself as well as the bishop unpopular with most of the clergy of the diocese. Her interference to veto the reappointment of the universally popular Mr Septimus Harding (protagonist of Trollope's earlier novel, The Warden) as warden of Hiram's Hospital is not well received, even though she gives the position to a needy clergyman, Mr Quiverful, with 14 children to support. Anthony Trollope (1815-1882) was one of the most successful, prolific and respected English novelists of the Victorian era. Some of his best-loved works, collectively known as the Chronicles of Barsetshire, revolve around the imaginary county of Barsetshire. He also wrote perceptive novels on political, social, and gender issues, and on other topical matters. Trollope's literary reputation dipped somewhat during the last years of his life, but he regained the esteem of critics by the mid-twentieth century.
FictionLiteratureHistorical Fiction

BARCHESTER TOWERS
Copy and paste the code into your website.
New here? Learn how to read digital books for free