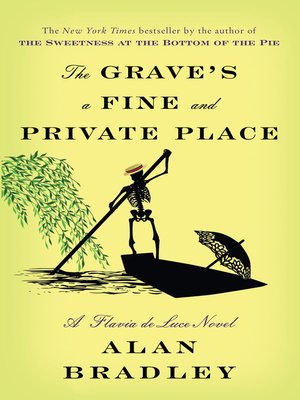 The Grave's a Fine and Private Place

FictionMysteryThrillerHistorical Fiction
NEW YORK TIMES BESTSELLER
In the wake of an unthinkable family tragedy, twelve-year-old Flavia de Luce is struggling to fill her empty days. For a needed escape, Dogger, the loyal family servant, suggests a boating trip for Flavia and her two older sisters. As their punt drifts past the church where a notorious vicar had recently dispatched three of his female parishioners by spiking their communion wine with cyanide, Flavia, an expert chemist with a passion for poisons, is ecstatic. Suddenly something grazes her fingers as she dangles them in the water. She clamps down on the object, imagining herself Ernest Hemingway battling a marlin, and pulls up what she expects will be a giant fish. But in Flavia's grip is something far better: a human head, attached to a human body. If anything could take Flavia's mind off sorrow, it is solving a murder—although one that may lead the young sleuth to an early grave.
Praise for The Grave's a Fine and Private Place
"Flavia [is] irrepressible, precocious and indefatigable. . . . A whole new chapter of Flavia's life opens as she approaches adolescence. Will she become the Madame Curie of crime?"—Bookreporter
"Outstanding . . . As usual, Bradley makes his improbable series conceit work and relieves the plot's inherent darkness with clever humor."—Publishers Weekly (starred review)

"There's only one Flavia. . . . Series fans will anticipate the details of this investigation, along with one last taste of Flavia's unorthodox family life."—Library Journal (starred review)

"Bradley's unquenchable heroine brings 'the most complicated case I had ever come across' to a highly satisfying conclusion, with the promise of still brighter days ahead."—Kirkus Reviews
FictionMysteryThrillerHistorical Fiction

Alan Bradley is the New York Times bestselling author of many short stories, children's stories, newspaper columns, and the memoir The Shoebox Bible. His first Flavia de Luce novel, The Sweetness at the Bottom of the Pie, received the Crime Writer...

More about Alan Bradley
The Grave's a Fine and Private Place
Copy and paste the code into your website.
New here? Learn how to read digital books for free