ebook ∣ The Original Siamese Twins and Their Rendezvous with American History 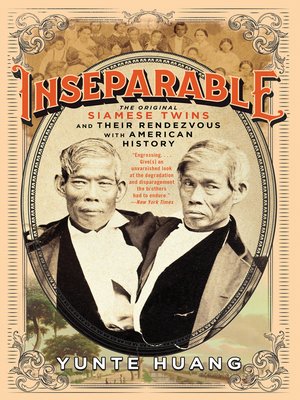 "An astonishing story, by turns ghastly, hilarious, unnerving, and moving."—Stephen Greenblatt, author of The Rise and Fall of Adam and Eve

In this "excellent" portrait of America's famed nineteenth-century Siamese twins, celebrated biographer Yunte Huang discovers in the conjoined lives of Chang and Eng Bunker (1811–1874) a trenchant "comment on the times in which we live" (Wall Street Journal). "Uncovering ironies, paradoxes and examples of how Chang and Eng subverted what Leslie Fiedler called 'the tyranny of the normal' " (BBC), Huang depicts the twins' implausible route to assimilation after their "discovery" in Siam by a British merchant in 1824 and arrival in Boston as sideshow curiosities in 1829. Their climb from subhuman, freak-show celebrities to rich, southern gentry who profited from entertaining the Jacksonian mobs; their marriage to two white sisters, resulting in twenty-one children; and their owning of slaves, is here not just another sensational biography but an "extraordinary" (New York Times), Hawthorne-like excavation of America's historical penchant for tyrannizing the other—a tradition that, as Huang reveals, becomes inseparable from American history itself.