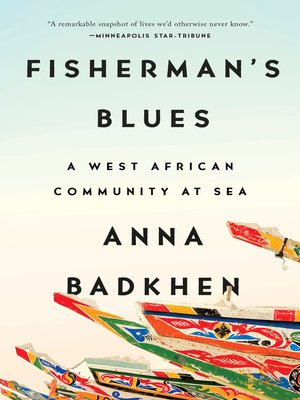 View more libraries...
NAMED A BEST BOOK OF THE YEAR BY THE CHRISTIAN SCIENCE MONITOR AND PASTE MAGAZINE
An intimate account of life in a West African fishing village, tugged by currents ancient and modern, and dependent on an ocean that is being radically transformed.
The sea is broken, fishermen say. The sea is empty. The genii have taken the fish elsewhere.
For centuries, fishermen have launched their pirogues from the Senegalese port of Joal, where the fish used to be so plentiful a man could dip his hand into the grey-green ocean and pull one out as big as his thigh. But in an Atlantic decimated by overfishing and climate change, the fish are harder and harder to find.
Here, Badkhen discovers, all boundaries are permeable—between land and sea, between myth and truth, even between storyteller and story. Fisherman's Blues immerses us in a community navigating a time of unprecedented environmental, economic, and cultural upheaval with resilience, ingenuity, and wonder.