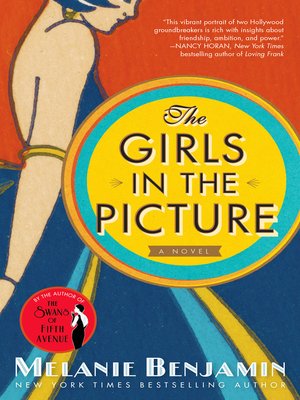 The Girls in the Picture

FictionLiteratureHistorical Fiction
From the New York Times bestselling author of The Swans of Fifth Avenue and The Aviator's Wife, a "rich exploration of two Hollywood friends who shaped the movies" (USA Today)—screenwriter Frances Marion and superstar Mary Pickford

"Full of Old Hollywood glamour and true details about the pair's historic careers . . . a captivating ode to a legendary bond."—Real Simple
NAMED ONE OF THE BEST BOOKS OF THE YEAR BY REAL SIMPLE
It is 1914, and twenty-five-year-old Frances Marion has left her (second) husband and her Northern California home for the lure of Los Angeles, where she is determined to live independently as an artist. But the word on everyone's lips these days is "flickers"—the silent moving pictures enthralling theatergoers. Turn any corner in this burgeoning town and you'll find made-up actors running around, as a movie camera captures it all.
In this fledgling industry, Frances finds her true calling: writing stories for this wondrous new medium. She also makes the acquaintance of actress Mary Pickford, whose signature golden curls and lively spirit have earned her the title "America's Sweetheart." The two ambitious young women hit it off instantly, their kinship fomented by their mutual fever to create, to move audiences to a frenzy, to start a revolution.
But their ambitions are challenged by both the men around them and the limitations imposed on their gender—and their astronomical success could come at a price. As Mary, the world's highest paid and most beloved actress, struggles to live her life under the spotlight, she also wonders if it is possible to find love, even with the dashing actor Douglas Fairbanks. Frances, too, longs to share her life with someone. As in any good Hollywood story, dramas will play out, personalities will clash, and even the deepest friendships might be shattered.
With cameos from such notables as Charlie Chaplin, Louis B. Mayer, Rudolph Valentino, and Lillian Gish, The Girls in the Picture is, at its heart, a story of friendship and forgiveness. Melanie Benjamin brilliantly captures the dawn of a glittering new era—its myths and icons, its possibilities and potential, and its seduction and heartbreak.

"A boffo production . . . Inspiration is a rare and unexpected gift in a book filled with the fluff of Hollywood, but Benjamin provides it with The Girls in the Picture."—NPR

"Profoundly resonant, The Girls in the Picture is at its core, an empowering and fascinating tale of sisterhood."—Bryce Dallas Howard
FictionLiteratureHistorical Fiction

Melanie Benjamin is the New York Times bestselling author of The Swans of Fifth Avenue, The Aviator's Wife, The Autobiography of Mrs. Tom Thumb, and Alice I Have Been. Benjamin lives in Chicago, where she is at work on her next historical novel.

More about Melanie Benjamin
The Girls in the Picture
Copy and paste the code into your website.
New here? Learn how to read digital books for free