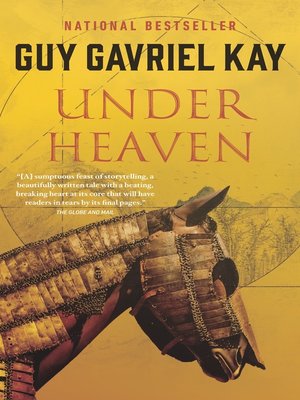 View more libraries...
View our feature on Guy Gavriel Kay's Under Heaven.In his latest innovative novel, the award-winning author evokes the dazzling Tang Dynasty of 8th-century China in a story of honor and power.
Inspired by the glory and power of Tang dynasty China, Guy Gavriel Kay has created a masterpiece.
It begins simply. Shen Tai, son of an illustrious general serving the Emperor of Kitai, has spent two years honoring the memory of his late father by burying the bones of the dead from both armies at the site of one of his father's last great battles. In recognition of his labors and his filial piety, an unlikely source has sent him a dangerous gift: 250 Sardian horses.
You give a man one of the famed Sardian horses to reward him greatly. You give him four or five to exalt him above his fellows, propel him towards rank, and earn him jealousy, possibly mortal jealousy. Two hundred and fifty is an unthinkable gift, a gift to overwhelm an emperor.
Wisely, the gift comes with the stipulation that Tai must claim the horses in person. Otherwise he would probably be dead already...