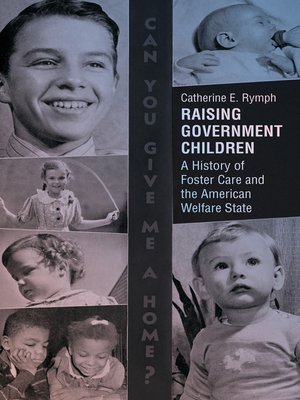 A History of Foster Care and the American Welfare State

HistoryPoliticsSociologyNonfiction
In the 1930s, buoyed by the potential of the New Deal, child welfare reformers hoped to formalize and modernize their methods, partly through professional casework but more importantly through the loving care of temporary, substitute families. Today, however, the foster care system is widely criticized for failing the children and families it is intended to help. How did a vision of dignified services become virtually synonymous with the breakup of poor families and a disparaged form of "welfare" that stigmatizes the women who provide it, the children who receive it, and their families?
Tracing the evolution of the modern American foster care system from its inception in the 1930s through the 1970s, Catherine Rymph argues that deeply gendered, domestic ideals, implicit assumptions about the relative value of poor children, and the complex public/private nature of American welfare provision fueled the cultural resistance to funding maternal and parental care. What emerged was a system of public social provision that was actually subsidized by foster families themselves, most of whom were concentrated toward the socioeconomic lower half, much like the children they served. Analyzing the ideas, debates, and policies surrounding foster care and foster parents' relationship to public welfare, Rymph reveals the framework for the building of the foster care system and draws out its implications for today's child support networks.
HistoryPoliticsSociologyNonfiction

Catherine E. Rymph is associate professor of history at the University of Missouri.

More about Catherine E. Rymph
Raising Government Children
Copy and paste the code into your website.
New here? Learn how to read digital books for free