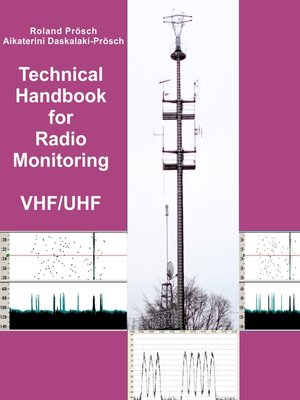 TechnologyNonfiction
This book is describing common waveforms used on VHF- and UHF. It shall help the interested reader to identify these waveforms. The book is describing digital modulations like FSK, PSK, FH, DSSS aso. and used protocols. Systems like AIS, ACARS, GMS, THURAYA and others are described with spectrum pictures and detailed technical parameter.
TechnologyNonfiction

Roland Proesch was born in 1960 in Kiel. He studied communication technology in Hamburg at the University of the German Army. Since 1977 he is a licensed radio amateur which has enabled him to pursue one of his most profound interests, namely all ...

Aikaterini Daskalaki-Proesch was born 1973 in Athens, Greece. She studied mathematics in Thessaloniki and music in Athens before she moved to Germany where she got her master in computer science with focus on communication and networks. After her ...

More about Aikaterini Daskalaki-Proesch
Technical Handbook for Radio Monitoring VHF/UHF
Copy and paste the code into your website.
New here? Learn how to read digital books for free