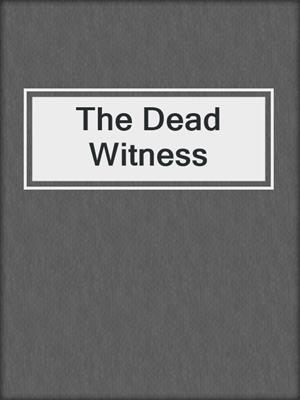 The Dead Witness gathers the finest adventures among private and police detectives from the nineteenth century and into the early twentieth—including a wide range of overlooked gems creating the finest ever anthology of Victorian detective stories. "The Dead Witness," the 1866 title story by Australian writer Mary Fortune, is the first known detective story by a woman, a suspenseful clue-strewn manhunt in the Outback. This forgotten treasure sets the tone for the whole anthology-surprises from every direction, including more female detectives and authors than you can find in any other anthology of its kind. Pioneer women writers such as Anna Katharine Green, Mary E. Wilkins, and C. L. Pirkis will take you from rural America to bustling London. Female detectives range from Loveday Brooke to Dorcas Dene and Madelyn Mack. In other stories, you will meet November Joe, the Canadian half-Native backwoods detective who stars in "The Crime at Big Tree Portage" and demonstrates that Sherlockian attention to detail works as well in the woods as in the city. Holmes himself is here, too, of course-not in another reprint of an already well-known story, but in the first two chapters of A Study in Scarlet, the first Holmes case, in which the great man meets and dazzles Watson. Authors range the gamut from luminaries such as Charles Dickens to the forgotten author who helped inspire Edgar Allan Poe's "The Murders in the Rue Morgue," the first real detective story. Bret Harte is here and so is E. W. Hornung, creator of master thief Raffles. Naturally Wilkie Collins couldn't be left behind. Michael Sims's new collection unfolds the fascinating and entertaining youth of what would mature into the most popular genre of the twentieth century.