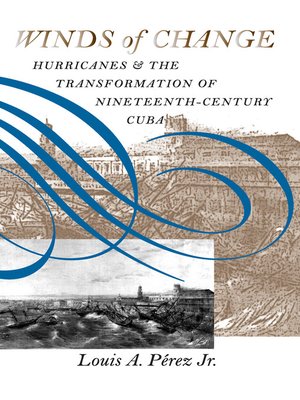 Hurricanes and the Transformation of Nineteenth-Century Cuba

HistoryNatureNonfiction
The first book to establish hurricanes as a key factor in the development of modern Cuba, Winds of Change shows how these great storms played a decisive role in shaping the economy, the culture, and the nation during a critical century in the island's history.
Always vulnerable to hurricanes, Cuba was ravaged in 1842, 1844, and 1846 by three catastrophic storms, with staggering losses of life and property. Louis Perez combines eyewitness and literary accounts with agricultural data and economic records to show how important facets of the colonial political economy—among them, land tenure forms, labor organization, and production systems—and many of the social relationships at the core of Cuban society were transformed as a result of these and lesser hurricanes. He also examines the impact of repeated natural disasters on the development of Cuban identity and community. Bound together in the face of forces beyond their control, Cubans forged bonds of unity in their ongoing efforts to persevere and recover in the aftermath of destruction.
HistoryNatureNonfiction

Louis A. Perez Jr. is J. Carlyle Sitterson Professor of History at the University of North Carolina at Chapel Hill. His books include On Becoming Cuban: Identity, Nationality, and Culture, winner of the 2000 Bolton-Johnson Prize, and The War of 18...

More about LOUIS A. PÉREZ JR.
Winds of Change
Copy and paste the code into your website.
New here? Learn how to read digital books for free