The Most Dangerous Area in the World 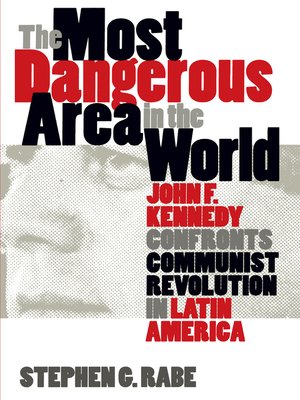 View more libraries...
In March 1961, President John F. Kennedy announced the formation of the Alliance for Progress, a program dedicated to creating prosperous, socially just, democratic societies throughout Latin America. Over the next few years, the United States spent nearly $20 billion in pursuit of the Alliance's goals, but Latin American economies barely grew, Latin American societies remained inequitable, and sixteen extraconstitutional changes of government rocked the region. In this close, critical analysis, Stephen Rabe explains why Kennedy's grand plan for Latin America proved such a signal policy failure.
Drawing on recently declassified materials, Rabe investigates the nature of Kennedy's intense anti-Communist crusade and explores the convictions that drove him to fight the Cold War throughout the Caribbean and Latin America—a region he repeatedly referred to as "the most dangerous area in the world." As Rabe acknowledges, Kennedy remains popular in the United States and Latin America, in part for the noble purposes behind the Alliance for Progress. But an unwavering determination to wage Cold War led Kennedy to compromise, even mutilate, those grand goals.

Politics Nonfiction
The Most Dangerous Area in the World