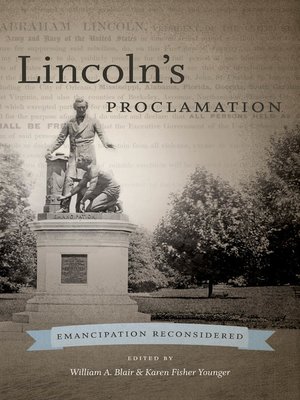 The Steven and Janice Brose Lectures in the Civil War Era

View more libraries...
The Emancipation Proclamation, widely remembered as the heroic act that ended slavery, in fact freed slaves only in states in the rebellious South. True emancipation was accomplished over a longer period and by several means. Essays by eight distinguished contributors consider aspects of the president's decision making, as well as events beyond Washington, offering new insights on the consequences and legacies of freedom, the engagement of black Americans in their liberation, and the issues of citizenship and rights that were not decided by Lincoln's document. The essays portray emancipation as a product of many hands, best understood by considering all the actors, the place, and the time.
The contributors are William A. Blair, Richard Carwardine, Paul Finkelman, Louis Gerteis, Steven Hahn, Stephanie McCurry, Mark E. Neely Jr., Michael Vorenberg, and Karen Fisher Younger.

The Steven and Janice Brose Lectures in the Civil War Era