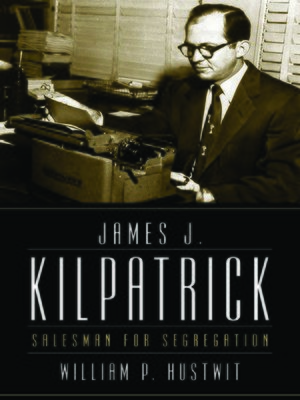 View more libraries...
James J. Kilpatrick was a nationally known television personality, journalist, and columnist whose conservative voice rang out loudly and widely through the twentieth century. As editor of the Richmond News Leader, writer for the National Review, debater in the "Point/Counterpoint" portion of CBS's 60 Minutes, and supporter of conservative political candidates like Barry Goldwater, Kilpatrick had many platforms for his race-based brand of southern conservatism. In James J. Kilpatrick: Salesman for Segregation, William Hustwit delivers a comprehensive study of Kilpatrick's importance to the civil rights era and explores how his protracted resistance to both desegregation and egalitarianism culminated in an enduring form of conservatism that revealed a nation's unease with racial change.
Relying on archival sources, including Kilpatrick's personal papers, Hustwit provides an invaluable look at what Gunnar Myrdal called the race problem in the "white mind" at the intersection of the postwar conservative and civil rights movements. Growing out of a painful family history and strongly conservative political cultures, Kilpatrick's personal values and self-interested opportunism contributed to America's ongoing struggles with race and reform.