From Brown to Meredith 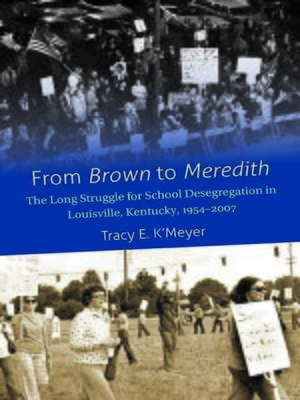 View more libraries...
When the Supreme Court overturned Louisville's local desegregation plan in 2007, the people of Jefferson County, Kentucky, faced the question of whether and how to maintain racial diversity in their schools. This debate came at a time when scholars, pundits, and much of the public had declared school integration a failed experiment rightfully abandoned. Using oral history narratives, newspaper accounts, and other documents, Tracy E. K'Meyer exposes the disappointments of desegregation, draws attention to those who struggled for over five decades to bring about equality and diversity, and highlights the many benefits of school integration.
K'Meyer chronicles the local response to Brown v. Board of Education in 1956 and describes the start of countywide busing in 1975 as well as the crisis sparked by violent opposition to it. She reveals the forgotten story of the defense of integration and busing reforms in the 1980s and 1990s, culminating in the response to the 2007 Supreme Court decision known as Meredith. This long and multifaceted struggle for school desegregation, K'Meyer shows, informs the ongoing movement for social justice in Louisville and beyond.