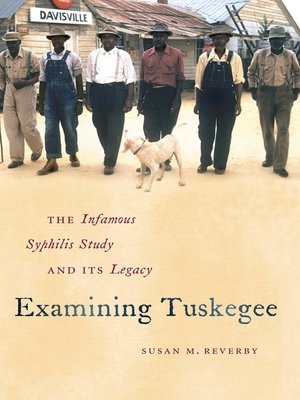 MedicalSociologyNonfiction
The forty-year Tuskegee Syphilis Study, which took place in and around Tuskegee, Alabama, from the 1930s through the 1970s, has become a profound metaphor for medical racism, government malfeasance, and physician arrogance. Susan M. Reverby's Examining Tuskegee is a comprehensive analysis of the notorious study of untreated syphilis among African American men, who were told by U.S. Public Health Service doctors that they were being treated, not just watched, for their late-stage syphilis. With rigorous clarity, Reverby investigates the study and its aftermath from multiple perspectives and illuminates the reasons for its continued power and resonance in our collective memory.
MedicalSociologyNonfiction

Susan M. Reverby is Marion Butler McLean Professor in the History of Ideas and Professor of Women's Studies at Wellesley College. She is editor of Tuskegee's Truths: Rethinking the Tuskegee Syphilis Study.

More about Susan M. Reverby
Examining Tuskegee
Copy and paste the code into your website.
New here? Learn how to read digital books for free