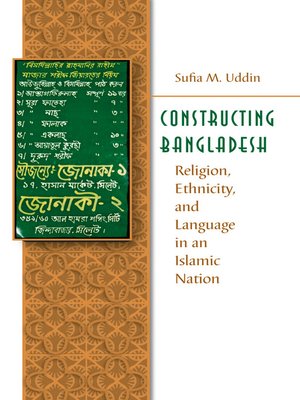 View more libraries...
Highlighting the dynamic, pluralistic nature of Islamic civilization, Sufia M. Uddin examines the complex history of Islamic state formation in Bangladesh, formerly the eastern part of the Indian province of Bengal. Uddin focuses on significant moments in the region's history from medieval to modern times, examining the interplay of language, popular and scholarly religious literature, and the colonial experience as they contributed to the creation of a unique Bengali-Islamic identity.
During the precolonial era, Bengali, the dominant regional language, infused the richly diverse traditions of the region, including Hinduism, Buddhism, and, eventually, the Islamic religion and literature brought by Urdu-speaking Muslim conquerors from North India. Islam was not simply imported into the region by the ruling elite, Uddin explains, but was incorporated into local tradition over hundreds of years of interactions between Bengalis and non-Bengali Muslims. Constantly contested and negotiated, the Bengali vision of Islamic orthodoxy and community was reflected in both language and politics, which ultimately produced a specifically Bengali-Muslim culture. Uddin argues that this process in Bangladesh is representative of what happens elsewhere in the Muslim world and is therefore an instructive example of the complex and fluid relations between local heritage and the greater Islamic global community, or umma.