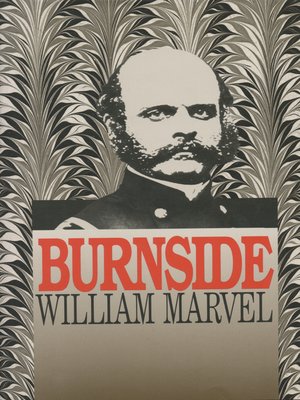 View more libraries...
Ambrose Burnside, the Union general, was a major player on the Civil War stage from the first clash at Bull Run until the final summer of the war. He led a corps or army during most of this time and played important roles in various theaters of the war. But until now, he has been remembered mostly for his distinctive side-whiskers that gave us the term "sideburns" and as an incompetent leader who threw away thousands of lives in the bloody battle of Fredericksburg.
In a biography focusing on the Civil War years, William Marvel reveals a more capable Burnside who managed to acquit himself creditably as a man and a soldier. Along the Carolina coast in 1862, Burnside won victories that catapulted him to fame. In that same year, he commanded a corps at Antietam and the Army of the Potomac at Fredericksburg. In East Tennessee in the summer and fall of 1863, he captured Knoxville, thereby fulfilling one of Lincoln's fondest dreams. Back in Virginia during the spring and summer of 1864, he once again led a corps at the battles of the Wilderness, Spotsylvania, Cold Harbor, and Petersburg. But after the fiasco of the Crater he was denied another assignment, and he resigned from the army the day that Lincoln was assassinated.
Marvel challenges the traditional evaluation of Burnside as a nice man who failed badly as a general. Marvel's extensive research indicates that Burnside was often the scapegoat of his superiors and his junior officers and that William B. Franklin deserves a large share of the blame for the Federal defeat at Fredericksburg. He suggests that Burnside's Tennessee campaign of 1863 contained much praiseworthy effort and shows during the Overland campaign from the Wilderness to Petersburg, and at the battle of the Crater, Burnside consistently suffered slights from junior officers who were confident that they could get away with almost any slur against "Old Burn." Although Burnside's performance included an occasional lapse, Marvel argues that he deserved far better treatment than he has received from his peers and subsequently from historians.