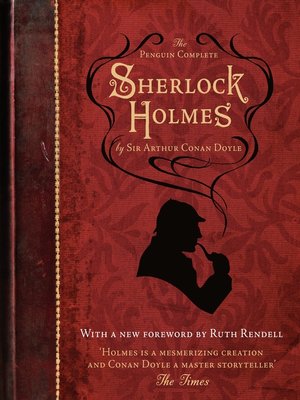 'Holmes has a timeless intelligence that puts him head, shoulders and deer-stalker above all other detectives' Alexander McCall Smith
_______________

This complete volume contains four novels and fifty-six short stories about the most engaging detective of all time, with a foreword by crime writer Ruth Rendell.

Sherlock Holmes, together with his faithful sidekick Doctor John H. Watson, proves himself as the quintessential detective. Time after time his pits his extraordinary wits and courage against foreign spies, blackmailers, cultists, petty thieves, murderers, swindlers, policemen (both stupid and clever), and his arch-nemesis Moriarty.

Continuing to enthral millions in film and TV adaptations, Arthur Conan Doyle's creation has inspired readers and writers of crime stories for well over a century. Join their ranks with this collection.
_______________

'The immense talent, passion and literary brilliance that Conan Doyle brought to his work give him a unique place in English letters. Personally, I'd walk a million miles in tight boots just to read his letters to the milkman' Stephen Fry

'Now, as in his lifetime, cab drivers, statesmen, academics, and raggedy-assed children sit spellbound at his feet. No wonder, then, if the pairing of Holmes and Watson has triggered more imitators than any other duo in literature' John Le Carré