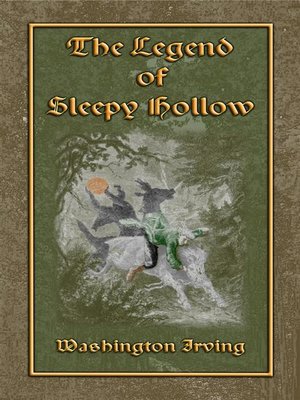 View more libraries...
The Legend of Sleepy Hollow is a short story by American author Washington Irving.The Story was written while Irving was living abroad in Birmingham, England, and is among the earliest examples of enduring popular American fiction.

The story is set in 1790 in the countryside around the Dutch settlement of Tarry Town (now historical Tarrytown, New York), in a secluded glen called Sleepy Hollow. A place renowned for its ghosts and haunting atmosphere. The most infamous spectre in the Hollow is the Headless Horseman, said to be the ghost of a Hessian trooper who lost his head during a battle of the American Revolutionary War.
The tale's protagonist, Ichabod Crane, is a lanky and extremely superstitious schoolmaster, who competes with Abraham "Brom Bones" Van Brunt, for the hand of 18-year-old Katrina Van Tassel, the daughter and only child of wealthy farmer Baltus Van Tassel. The two vie for Katrina's hand, with Brom playing a series of pranks on the jittery schoolmaster. The tension between the three is brought to a head on a placid autumn night, at the harvest party. He dances, partakes in the feast, and listens to ghostly legends told by the locals, but his true aim is to propose to Katrina. His intentions, however, are ill-fated.

After departing the party, Ichabod rides home through the woods with a heavy heart. He passes several haunted spots, until he encounters a cloaked rider at an intersection in a putrid swamp. The teacher is horrified to discover that the rider's head is not on his shoulders, but on his saddle. Ichabod rides for his life in a frantic race to the bridge, desperately goading his temperamental plow horse to gallop faster. To the pedagogue's horror, the ghoul clambers over the bridge, rears his horse, and hurls his severed head into Ichabod's terrified face.
The next morning, Ichabod has mysteriously disappeared from town, leaving Katrina to marry Brom Bones.......