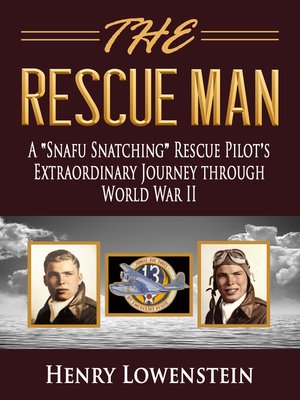 HistoryMilitaryNonfiction
THE RESCUE MAN presents the extraordinary and unique journey of a World War II-era rescue pilot, First Lieutenant Frank Philby "Bud" Hayes, from his childhood in Idaho through his training for and service during World War II. Bud helps tell this story himself through his letters and records, which are this book's main foundation and reveal tales of excitement, trials and tribulations, achievement, heroism and ultimately tragedy and mystery. The U.S. Army Air Force's Second Emergency Rescue Squadron that Bud served in saved over seven hundred downed pilots during the war, making them responsible for thousands of children and grandchildren being alive today. Nevertheless, history has left Bud's incredible story, and that of his squadron, largely untold... until now.Paralleling this book's focus on Bud and his rescue squadron, this book also tells the interrelated broader story of major pre-, mid- and post-World War II events occurring in the U.S., Europe and the Pacific. This includes little known, but significant, stories like that of a turf war between the U.S. Army Air Force and the U.S. Navy over who would be responsible for performing rescue missions during World War II, all while their servicemen's lives hung in the balance. In this book, World War II's events help tell Bud's story, and Bud's events help tell World War II's story. Or as this book's preface states it, the book "tells history through a biography and presents a biography in the context of history."As members of Bud's greatest generation continue to pass on from our lives, it is important that we preserve their unique and sometimes never-before-heard stories about World War II. This is one such story. It is the untold story of Bud, of his Second Emergency Rescue Squadron and of their involvement in and relation to the events of World War II. The story is as extraordinary, unique and powerful as it ultimately is tragic and mysterious. Thanks to Bud and his rescue squadron, over seven hundred men returned home from war with the opportunity to start families and pursue their American dreams. Will Bud also come home?
HistoryMilitaryNonfiction

HENRY LOWENSTEIN, PH.D. is professor of management and law and former dean of the Wall College of Business at Coastal Carolina University. He previously was dean of business and public administration at California State University Bakersfield and ...

More about Henry Lowenstein
The Rescue Man
Copy and paste the code into your website.
New here? Learn how to read digital books for free