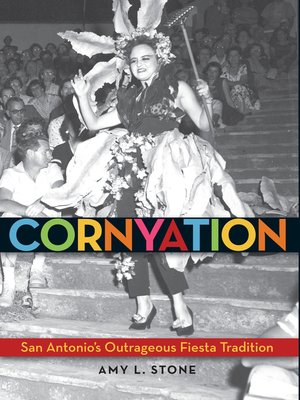 View more libraries...
Fiesta San Antonio began in 1891 began as a parade in honor of the battles of the Alamo and San Jacinto and has evolved into an annual Mardi Gras-like festival attended by four million with more than 100 cultural events raising money for nonprofit organizations in San Antonio, Texas.
At Fiesta's start, the events were socially exclusive, one of the most prominent being the Coronation of the Queen of the Order of the Alamo, a lavish, debutante pageant crowning a queen of the festival. Cornyation was created in 1951 by members of the San Antonio's theater community as a satire, mocking the elite with their own flamboyant duchesses, empresses, and queens, accompanied by men in drag and local political figures in outrageous costume. The stage show quickly transformed into a controversial parody of local and national politics and culture.
Cornyation is the first history of this major Fiesta San Antonio event, tracing how it has become one of Texas's iconic and longest-running LGBT events, and one of the Southwest's first large-scale fundraisers for HIV-AIDS research, raising more than $2.5 million since 1990.