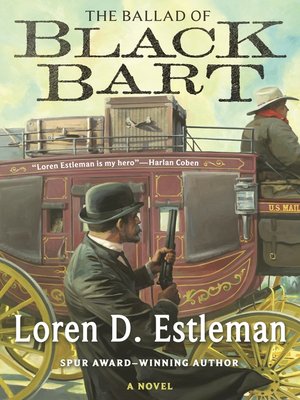 The Ballad of Black Bart

"Loren Estleman is my hero."—Harlan Coben

Between July 1875 and November 1883, a single outlaw robbed the stagecoaches of Wells Fargo in California's Mother Lode country a record of twenty-eight times. Armed with an unloaded shotgun, walking to and from the scenes of the robberies, often for hundreds of miles, and leaving poems behind, the infamous Black Bart was fiercely hunted.

Between robberies, Black Bart was known as Charles E. Bolton, a distinguished, middle-aged man who enjoyed San Francisco's entertainments in the company of socialites drawn to his quiet, temperate good nature and upper-class tastes.

Meanwhile, James B. Hume, Wells Fargo's legendary chief of detectives, made Bart's apprehension a matter of personal as well as professional interest.

The Ballad of Black Bart is a duel of wits involving two adversaries of surpassing cleverness, set against the vivid backdrop of the Old West.

More about Loren D. Estleman
The Ballad of Black Bart
Copy and paste the code into your website.
New here? Learn how to read digital books for free