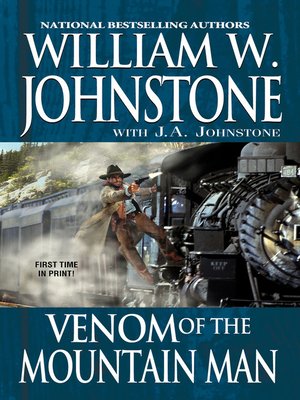 Venom of the Mountain Man

A TRAIN RIDE TO HELL

When Smoke Jensen sees a gang of outlaws holding up a stagecoach, his gunfighter instincts take over and he storms in with guns blazing. He kills one of the gunmen, the rest scatter like the rats they are. Another notch on the sharpshooter's weathered grip. But the dead man is the brother of the notorious outlaw Gabe Briggs, and Briggs will want revenge . . .

Tired of the savagery of the lawless countryside, Smoke's wife Sally heads back east for a spell, only to find the big city choking in filth, violence, and corruption. Before Sally can head back home, though, she's snatched right off the street.

When Smoke gets word that Sally's been kidnapped, he hops the first train east. But Gabe Briggs and his ruthless bandof bad men are along for the ride. Unless Smoke can punch their ticket to hell first, they'll blow this train sky high . . .
FictionWesternThrillerHistorical Fiction

More about William W. Johnstone
Venom of the Mountain Man
Copy and paste the code into your website.
New here? Learn how to read digital books for free