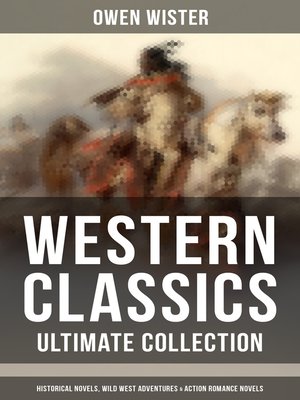 FictionRomanceWestern
This carefully edited collection of adventure novels & western classics has been designed and formatted to the highest digital standards and adjusted for readability on all devices. Owen Wister is an American writer and "father" of western fiction. When he started writing, he naturally inclined towards fiction set on the western frontier. Wister's most famous work remains the novel The Virginian, set in the Wild West. It describes the life of a cowboy who is a natural aristocrat, set against a highly mythologized version of the Johnson County War and taking the side of the large land owners. The Virginian paved the way for many more westerns by such authors as Zane Grey, Louis L'Amour, and several others. It is also widely regarded as being the first cowboy novel. Table of Contents: Lin McLean The Virginian: A Horseman of the Plains Red Man and White Red Man and White Little Big Horn Medicine Specimen Jones The Serenade At Siskiyuo The General's Bluff Salvation Gap The Second Missouri Compromise La Tinaja Bonita A Pilgrim on the Gila The Jimmyjohn Boss A Kinsman of Red Cloud Sharon's Choice Napoleon Shave-Tail Twenty Minutes for Refreshments The Promised Land Hank's Woman Padre Ignacio: or, the Song of Temptation
FictionRomanceWestern

WESTERN CLASSICS--Ultimate Collection
Copy and paste the code into your website.
New here? Learn how to read digital books for free