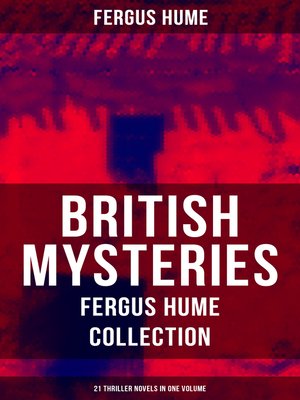 21 Thriller Novels in One Volume: The Mystery of a Hansom Cab, Red Money, The Bishop's Secret, The Pagan's Cup, A Coin of Edward VII, The Secret Passage, The Green Mummy, A Woman's Burden, The Crowned Skull, Hagar of the Pawn-Shop...

FictionMysteryShort StoriesThriller
This Fergus Hume thriller collection is formatted to the highest digital standards. The edition incorporates an interactive table of contents, footnotes and other information relevant to the content which makes the reading experience meticulously organized and enjoyable. Fergus Hume (1859-1932) was a prolific English novelist. His self-published novel, "The Mystery of a Hansom Cab", became a great success. Hume based his descriptions of poor urban life on his knowledge of Little Bourke Street. It eventually became the best selling mystery novel of the Victorian era, author John Sutherland terming it the "most sensationally popular crime and detective novel of the century". Table of Contents: The Mystery of a Hansom Cab Professor Brankel's Secret Madame Midas The Harlequin Opal The Expedition of Captain Flick Hagar of the Pawn-Shop The Silent House The Bishop's Secret A Woman's Burden The Pagan's Cup A Coin of Edward VII The Mandarin's Fan The Red Window The Secret Passage The Opal Serpent The Green Mummy The Crowned Skull The Solitary Farm The Mystery Queen Red Money A Son of Perdition
FictionMysteryShort StoriesThriller

BRITISH MYSTERIES--Fergus Hume Collection
Copy and paste the code into your website.
New here? Learn how to read digital books for free