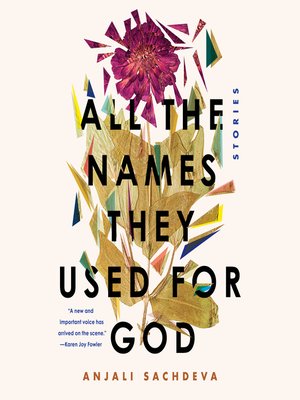 All the Names They Used for God

FantasyFictionLiteratureShort Stories
For fans of Dave Eggers and Kelly Link, an exhilarating collection of stories that explores the mysterious, often dangerous forces that shape our lives—from censorship and terrorism to technology and online dating.
Spanning centuries, continents, and a diverse set of characters, these alluringly strange stories are united by each character's struggle with fate. In a secret, subterranean world beneath the prairie of the Old West, a homesteader risks her life in search of a safe haven. A workman in Andrew Carnegie's steel mills is turned into a medical oddity by the brutal power of the furnaces—and is eventually revitalized by his condition. A young woman created through genetic manipulation is destroyed by the same force that gave her life.
With her distinctive blend of magical realism, science, and poetic prose, Anjali Sachdeva demonstrates a preternatural ability to laser in on our fears, our hopes, and our longings in order to point out intrinsic truths about society and humanity. "Killer of Kings" starts with John Milton writing Paradise Lost and questions the very nature of power—and the ability to see any hero as a tyrant with just a change in perspective. The title story presents a stirring imagining of the aftermath of the kidnapping of Nigerian schoolgirls by Boko Haram that leaves us pondering what is lost when we survive the unsurvivable.
Like many of us, the characters in this collection are in pursuit of the sublime, and find themselves looking not just to divinity but to science, nature, psychology, and industry, forgetting that their new, logical deities are no more trustworthy than the tempestuous gods of the olden days. Along the way, they walk the knife-edge between wonder and terror, salvation and destruction. All the Names They Used for God is an entrancing work of speculative fiction that heralds Anjali Sachdeva as an invigorating, incomparable new voice.
Audiobook Table of Contents:
THE WORLD BY NIGHT, read by Cassandra Campbell
GLASS-LUNG, read by Cassandra Campbell
LOGGING LAKE, read by Cassandra Campbell
KILLER OF KINGS, read by Cassandra Campbell
ALL THE NAMES FOR GOD, read by Zainab Jah
ROBERT GREENMAN AND THE MERMAID, read by Cassandra Campbell
ANYTHING YOU MIGHT WANT, read by Cassandra Campbell
MANUS, read by Will Damron
PLEIADES, read by Jorjeana Marie and MacLeod Andrews
"So rich they read like dreams—or, more often, nightmares—the nine stories in Sachdeva's otherworldly debut center upon the unforgiving forces that determine the shape of our lives, as glorious as they are brutal. . . . These modern forces are as vast and incomprehensible as any gods. . . . [The stories] span time, space, and logic: Nigeria and New Hampshire, the past and the future, realism and science fiction. And yet, for all its scope, it is a strikingly unified collection, with each story reading like a poem, or a fable. . . . They are enormous stories, not in length but in ambition, each an entirely new, unsparing world. Beautiful, draining—and entirely unforgettable."—Kirkus Reviews (starred review)
FantasyFictionLiteratureShort Stories

Anjali Sachdeva's fiction appears in The Iowa Review, Gulf Coast, The Yale Review, Alaska Quarterly Review, The Literary Review, and The Best American Nonrequired Reading. She is a graduate of the Iowa Writers' Workshop and has taught writing at t...

All the Names They Used for God
Copy and paste the code into your website.
New here? Learn how to read digital books for free