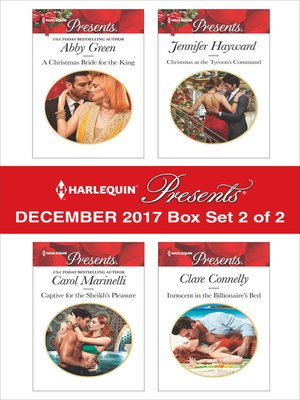 View more libraries...
Harlequin® Presents brings you a collection of four new titles! This Presents box set includes:
A CHRISTMAS BRIDE FOR THE KING
Rulers of the Desert
By Abby Green
Sheikh Salim Al-Noury is determined not to rule—until a beautiful diplomat is hired to persuade him to reconsider. Working abroad is Charlotte McQuillan's perfect getaway from Christmas heartbreak. But Salim's rugged masculinity soon awakens Charlotte to unimaginable pleasures!
CAPTIVE FOR THE SHEIKH'S PLEASURE
Ruthless Royal Sheikhs
By Carol Marinelli
Sheikh Ilyas al-Razim won't let a waitress attempt to blackmail him—even if that means taking stunning Maggie Delaney as his hostage. Maggie convinces Ilyas of her innocence and is freed...yet now she's held captive by their smouldering desire!
CHRISTMAS AT THE TYCOON'S COMMAND
The Powerful Di Fiore Tycoons
By Jennifer Hayward
Chloe dreads working with Nico Di Fiore, the man who once coldly rejected her. Nothing will distract Nico from success, including his craving for Chloe. But now, with their connection undeniable, Nico is determined to take Chloe as his own!
INNOCENT IN THE BILLIONAIRE'S BED
By Clare Connelly
Rio Mastrangelo is determined to sell his father's island as fast as he can! Potential purchaser Tilly Morgan's luscious body fills him with hot desire. When a storm hits, trapping them together, there's nowhere to run from their raging hunger!
Be sure to collect Harlequin® Presents' December 2017 Box Set 1 of 2!