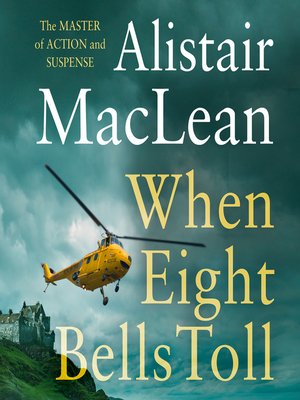 FictionSuspenseThriller
From the acclaimed master of action and suspense. The all time classic Millions of pounds in gold bullion are being pirated in the Irish Sea. Investigations by the British Secret Service, and a sixth sense, have bought Philip Calvert to a bleak, lonely bay in the Western Highlands. But the sleepy atmosphere of Torbay is deceptive. The place is the focal point of many mysterious disappearances. Even the unimaginative Highland Police Sergeant seems to be acting a part. But why? This story is Alistair MacLean at his enthralling best. It has all the edge-of-the-seat suspense and dry humour that millions of readers have devoured for years.
FictionSuspenseThriller

More about Alistair MacLean
When Eight Bells Toll
Copy and paste the code into your website.
New here? Learn how to read digital books for free