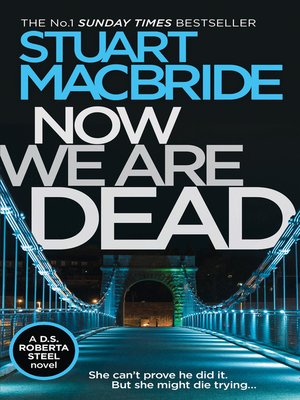 Now We Are Dead

FictionMystery
She can't prove he did it. But she might die trying... From the Sunday Times No.1 bestselling author of the Logan McRae series, comes a standalone spinoff featuring DS Roberta Steel. Revenge is a dangerous thing... Detective Chief Inspector Roberta Steel got caught fitting up Jack Wallace – that's why they demoted her and quashed his sentence. Now he's back on the streets and women are being attacked again. The top brass have made it very clear that if Detective Sergeant Steel goes anywhere near him, she'll be thrown off the force for good. But she can't just do nothing – if she does he'll keep hurting women. The question is: how much is she willing to sacrifice to stop him?
FictionMystery

Stuart MacBride is the Sunday Times No. 1 bestselling author of the Logan McRae and Ash Henderson novels. His work has won several prizes and in 2015 he was awarded an honorary doctorate by Dundee University. Stuart lives in the north-east of Scot...

More about Stuart MacBride
Now We Are Dead
Copy and paste the code into your website.
New here? Learn how to read digital books for free