Before the Devil Breaks You 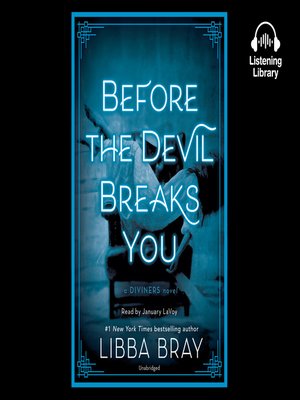 View more libraries...
The Diviners are back in this thrilling and eerie third installment by #1 New York Times bestselling author Libba Bray.
After battling a sleeping sickness, The Diviners are up against a group of new and malevolent foes—ghosts! Out in Ward's Island sits a mental hospital full of lost souls from people long forgotten. Ghosts who have unusual and dangerous ties to the Man in the Stovepipe Hat also known as the King of Crows.
With terrible accounts of murder and possession flooding in from all over New York City, the Diviners must band together and brave the ghosts haunting the asylum to bring down the King of Crows.
Heart-pounding action and terrifying moments will leave you breathless in the third book of the four-book Diviners series by #1 New York Times bestselling author Libba Bray.