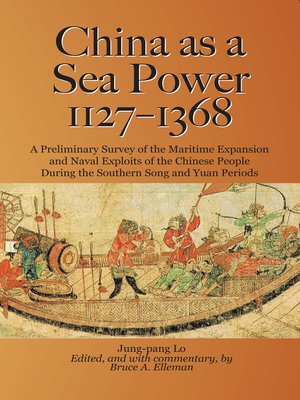 Lo Jung-pang argues that during each of the three periods when imperial China embarked on maritime enterprises (the Qin and Han dynasties, the Sui and early Tang dynasties, and Song, Yuan, and early Ming dynasties), coastal states took the initiative at a time when China was divided, maritime trade and exploration subsequently peaked when China was strong and unified, and declined as Chinese power weakened. At such times, China's people became absorbed by internal affairs, and state policy focused on threats from the north and the west. These cycles of maritime activity, each lasting roughly five hundred years, corresponded with cycles of cohesion and division, strength and weakness, prosperity and impoverishment, expansion and contraction.In the early 21st century, a strong and outward looking China is again building up its navy and seeking maritime dominance, with important implications for trade, diplomacy and naval affairs. Events will not necessarily follow the same course as in the past, but Lo Jung-pang's analysis suggests useful questions for the study of events as they unfold and decades to come.

Bruce Allen Elleman is Research Professor in the Maritime History Department of the Center for Naval Warfare Studies at the U.S. Naval War College.

More about Bruce A. Elleman

Lo Jung-pang (1912-81) was a renowned professor of Chinese history at the University of California at Davis. In 1957 he completed a 600-page typed manuscript entitled China as a Sea Power, 1127-1368, but he died without arranging for the book to b...

More about Jung-pang Lo
China as a Sea Power, 1127–1368
Copy and paste the code into your website.
New here? Learn how to read digital books for free