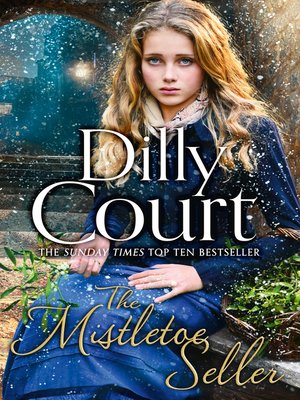 FictionLiterature
**You can pre-order Dilly's brand new heartwarming Christmas novel now** It's Christmas Eve. Flurries of snow fall on the cobbled streets of Whitechapel and an abandoned baby, swaddled in a blanket, is found on a doorstep in Angel Lane . . . Named after the street on which she was found, Angel Winter was blessed to be taken from the harsh streets into a loving home. But fate deals a cruel blow and she's torn from the only family she has ever known, and thrown onto the cobbles of Covent Garden to fend for herself. With winter closing in, Angel scratches a living selling mistletoe to the City gentlemen who pass through the market, hoping they will take pity on her as she shivers in the snow. The only way she can survive is to make her own luck. She will never sell the one treasure that could feed her for a month, the gold and ruby ring that was hidden in her swaddling – it could hold the key to the secrets of her past . . .
FictionLiterature

Dilly Court is a Sunday Times bestselling author of over thirty novels. She grew up in North East London and began her career in television, writing scripts for commercials. She is married with two grown-up children and four grandchildren, and now...

More about Dilly Court
The Mistletoe Seller
Copy and paste the code into your website.
New here? Learn how to read digital books for free