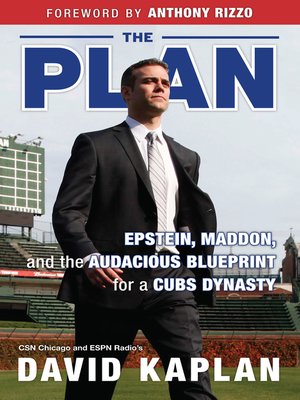 Epstein, Maddon, and the Audacious Blueprint for a Cubs Dynasty

On October 12, 2011, Theo Epstein became the new Chicago Cubs president of baseball operations, flipping a switch on the lovable-loser franchise and initiating a plan to accomplish in Chicago what he'd succeeded in as general manager of the Boston Red Sox: ending a World Series drought. It would require a complete team tear-down and turnover, a new farm system foundation of young talent which Epstein and Cubs GM Jed Hoyer gradually added to with gutsy trades and timely signings. After years of rebuilding, Epstein's crystalline vision has been unquestionably realized in the form of one of the most exciting and talented teams in baseball, led by heavyweights like Anthony Rizzo and Kris Bryant as well as visionaries like manager Joe Maddon. In The Plan, David Kaplan of CSN Chicago and ESPN Radio goes behind the scenes with the Cubs and their front office, walking the steps of their captivating rise to becoming 2016 World Series champions. Featuring exclusive interviews with Epstein, owner Tom Ricketts, and other team insiders, this is the definitive account of a new era on the North Side.

David Kaplan is a three-time Emmy Award winner. He currently hosts Kap and Co. on ESPN Radio 1000, and co-hosts Sports Talk Live and the Chicago Cubs pre- and post-game shows on Comcast SportsNet. You can follow him on Twitter at @thekapman.

More about David Kaplan
The Plan
Copy and paste the code into your website.
New here? Learn how to read digital books for free