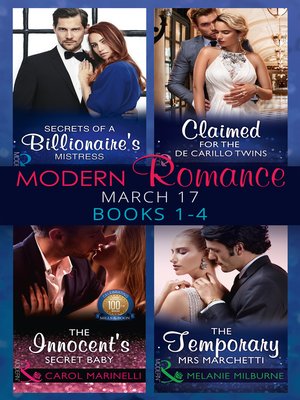 Secrets of a Billionaire's Mistress / Claimed for the De Carrillo Twins / The Innocent's Secret Baby / The Temporary Mrs. Marchetti

FictionRomance
The latest sizzlingly sexy Modern romances from Mills & Boon Secrets of a Billionaire's Mistress by Sharon Kendrick Waitress... Neither tall, willowy or sophisticated, waitress Darcy Denton knew she wasn't Renzo Sabatini's usual type. But enthralled by the powerful magnate, unworldly Darcy became addicted to their passionate nights together. Mistress... Ensconced in Renzo's secluded Tuscan villa, Darcy glimpses Renzo's troubled past and desolate soul. She should end it before she gets in too deep, but then she discovers she's pregnant! Wife? Harbouring her own childhood secrets, Darcy dare not tell Renzo, but as the mother of his child it's only a matter of time – nine months to be exact – before he claims what's his... Claimed for the De Carrillo Twins by Abby Green She'd just whispered one word, 'Please.' Cruz De Carrillo cannot forget the searing kiss he shared with his shy maid, Trinity Adams. For the moment the Spanish billionaire walked away, horrified at losing his legendary control, Trinity quickly moved on – to become nanny, guardian and step-mother to his brother's sons! Now Cruz must protect his orphaned nephews. When Trinity refuses to leave them, he knows there is one solution – a ring on her finger! It's the only way Cruz can keep her in his castillo, under his watchful eye, and finish what he started – this time in his bed! The Innocent's Secret Baby by Carol Marinelli A ruthless billionaire... When Sicilian tycoon Raul Di Savo meets Lydia Hayward it's not only her cool elegance he desires—seducing Lydia will also deny his lifelong rival's bid for her body... An innocent in peril... Desperate to escape being sold to a stranger, Lydia turns to Raul—he only promises her one night, but his expert touch awakens her to pleasure she cannot resist! A nine-month consequence! Discovering she's a pawn in Raul's game of revenge, Lydia leaves...and then she realises an unexpected consequence will bind her to Raul for ever! The Temporary Mrs. Marchetti by Melanie Milburne The rules of engagement... When Cristiano Marchetti proposes to former mistress Alice Piper, the deal has an expiry date. He has six months to fulfil the conditions of his grandmother's will. But the hotelier has another agenda...exacting revenge on Alice for daring to walk away seven years before! Alice needs the financial security her enemy is providing but soon their every clash is a shockingly tempting encounter. Yet as she uncovers the man beneath the hard-hearted exterior, the future Mrs Marchetti wonders if she could break the rules of their engagement...and walk down the aisle as more than Cristiano's temporary bride!
FictionRomance

Carol Marinelli recently filled in a form asking for her job title. Thrilled to be able to put down her answer, she put writer. Then it asked what Carol did for relaxation and she put down the truth - writing. The third question asked for her hobb...

Melanie Milburne read her first Harlequin at age seventeen in between studying for her final exams. After completing a Masters Degree in Education she decided to write a novel in between settling down to do a PhD. She became so hooked on writing r...

Modern Romance March 2017 Books 1--4
Copy and paste the code into your website.
New here? Learn how to read digital books for free