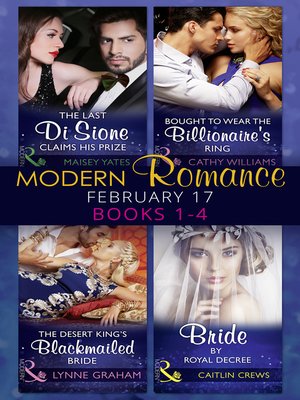 FictionRomance
The Last Di Sione Claims His Prize – Maisey Yates Alessandro Di Sione is renowned for being cold and unsentimental, but even he can't deny his grandfather's dream of retrieving a painting steeped in royal scandal. Yet the key to its return is the outspoken Princess Gabriella. Bought to Wear the Billionaire's Ring – Cathy Williams Samantha Wilson never forgot the sting of Leo Morgan-White's youthful rejection, but now the brooding billionaire is offering a solution to her mother's debts, and she can't refuse. Leo's deal was simple, Samantha would pose as his fiancée to help secure custody of his late step-brother's daughter. But Samantha's purity is a breath of fresh air in Leo's cynical world and the temptation to satisfy his lust for her becomes irresistible. The Desert King's Blackmailed Bride – Lynne Graham King Rashad is suspicious of desirable Polly but her possession of the ring has caught the imagination of his country. They believe that Polly is the bride he's been waiting for, so Rashad begins a fiery sensual onslaught to melt away Polly's resolve and have her begging to walk down the aisle! Bride by Royal Decree – Caitlin Crews Waitress Maggy's family history is a mystery, and even though she often dreamed of Prince Charming, he was never as devastatingly handsome as Reza! Fiercely independent, she won't accept her birthright on any terms but her own, so if Reza can't use legal bindings, he'll use sensual ones that Maggy will be helpless to resist!
FictionRomance

Modern Romance February Books 1-4
Copy and paste the code into your website.
New here? Learn how to read digital books for free